Day 3 not only promised nice weather, but also exciting games. Team Austria was still looking for its first win but with Italy in the opposing dugout, the task wasn’t an easy one. Andrew Maggi started off the game with a home run to define the balance of strength from the very beginning. Italy added another run in the first and one each in the second and third inning, including a long ball by John Andreoli. In the fourth a total of three singles helped Austria to score their first run of the game, making it 4:1.

Paul Astl came on the mound in the bottom of the inning and did a pretty decent job to cool down the Italian hitters. The Azzuri could add two more runs in the sixth and loaded up the bases in the ninth. After three strikeouts, Chris Colabello finally found his swing and hit a grand-slam home run to make it 10:1. Rivera came in to finish the game on the mound for team Italy and just like that, Italy earned its third win in the tournament.

The second game of group B on this Monday featured the matchup between Croatia and Belgium. Both teams showed some great performances so far, but needed to add more wins to their account to advance to the quarter finals at the end of the week. Croatia was just shy of beating Spain in the opening game and challenged Italy until extra innings on Sunday.

Jose Diaz for Croatia and Kevin Desmedt for Belgium were putting up a great pitching matchup. Benjamin Goffaux was the first batter to come through and batting in the first run for Belgium. The second one followed after a Sac-Fly by Benjamin Dille.

The Croatians are known as fighters but it took them until the fifth inning until they could finally come through. Slobodan Gales took a big swing and could score three of his team mates to take the 3:2 lead. After another run in the sixth, Gales had another very important hit, when he tripled and scored the 5:2. He then scored two batters later for the 6:2 lead.

Antonio Horvatic now came onto the mound for Croatia to secure the win, but the Red Hawks and their very own Thomas De Wolf were not done yet. They already managed to score one run in the seventh and another one in the eighth inning, when their number three hitter went up to bat. The bases were loaded with two outs when Thomas De Wolf took a big swing and right off the bat, everybody in the ball park saw the long and towering shot over the outfield fence for a grand slam. Belgium was taking over the lead and after a one-two-three ninth, closer Kenny Van de Branden, they won the game 6:9.

Great Britain took a tough lost in yesterday’s night game against Germany, loosing just 1:0 after a solo home run. The Czech on the other hand were able to deliver the first big surprise of this tournament on Sunday when they beat the current European Champion Netherlands. The tension was high from the very first inning, as both teams needed this win on their way to the WBSC Olympic Qualifier. With Boris Bokaj for the Czech and Alex Webb for Team GB, two solid pitchers were facing each other and kept the game tight for the first few innings. In the fourth, Crosby reached through a fielding error and as so often on this level, the opponent makes you pay for it. Ben Andrews tripled through the right-centerfield gap and knocked in the first run of the game. Jordan Serena added a long ball a frame later. A pair of singles combined with some small ball added the third run for the British.

Martin Schneider, who did his part in the victory against the Dutch the day before stepped to the plate. With runners on first and second he took a big swing and hit it over the left field fence to tie the game in the seventh. Petr Minarik followed in relieve for the Czech Republic and just as the momentum starting shifting he could slow down the British offensive game. The bats now kept quiet the following two innings and the game went into extra innings.

Czech’s closer, Jan Novak, came to the mound to get out of the extra inning, which starts with runners on first and second to speed up the game. The inning didn’t start off well for the team in defense, committing an error to load up the bases. In return they could turn a double play on the next batter but one run scored and team GB took 4:3-lead. In the bottom of the tenth, Petr Czech dropped down a bunt to move the runners over. Martin Muzic was walked intentionally to load up the bases by one out. If the British pitcher Richard Brereton had any nerves, they didn’t seem to show, as he struck out the next batter and forced a ground ball to end the game and secure the 4:3-win for Great Britain. 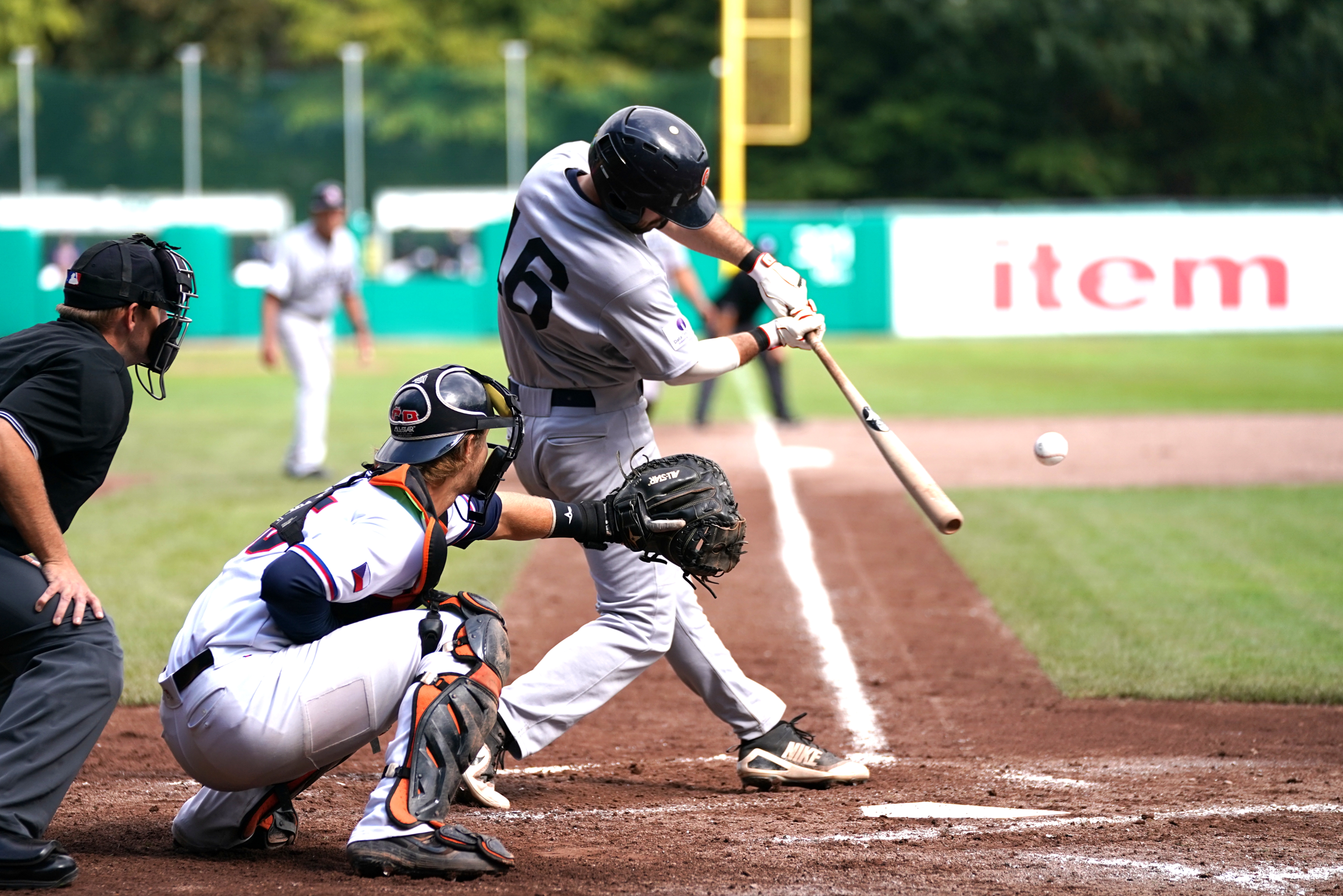 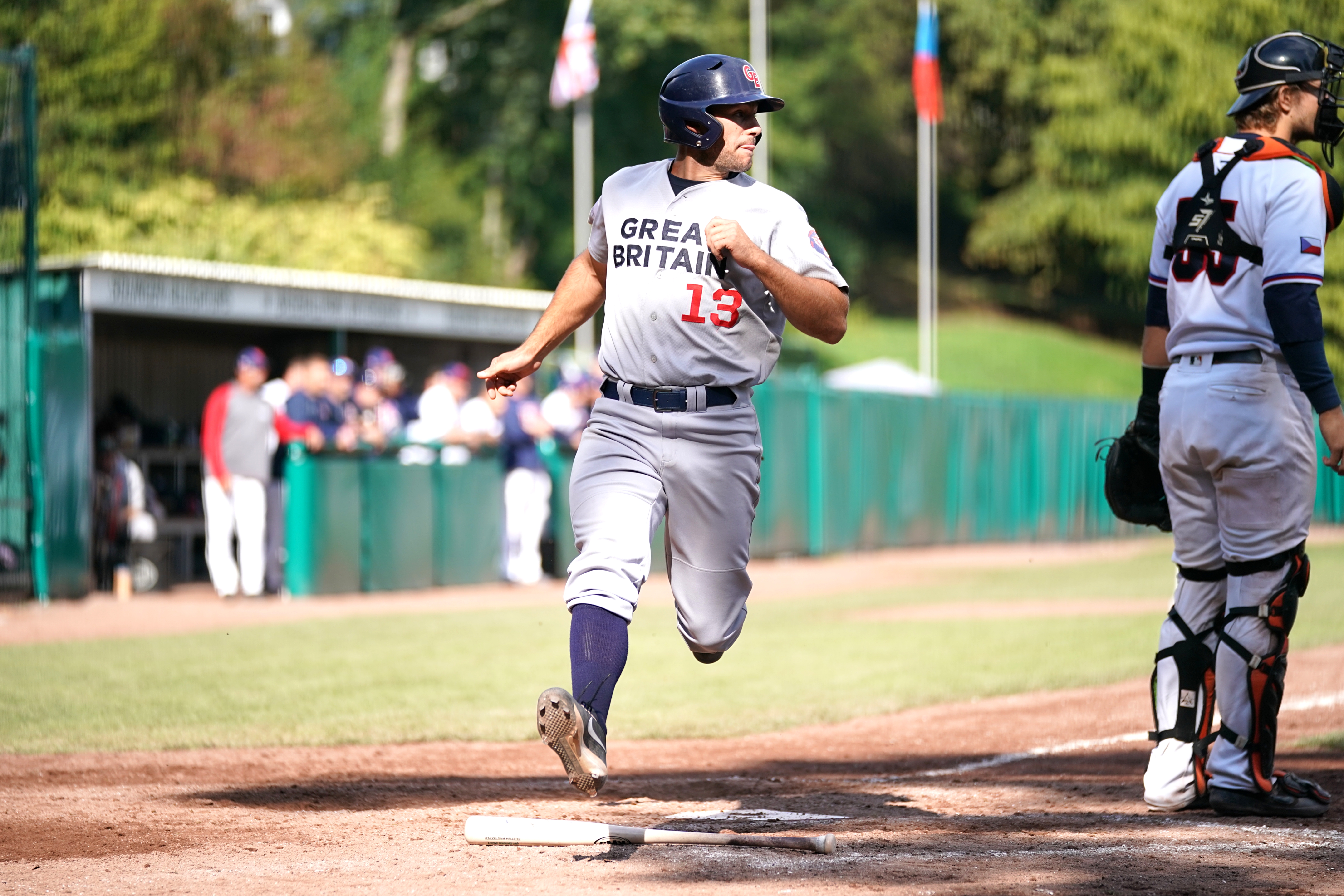 After an unexpected loss to the Czech Republic, the Netherlands needed a win in today’s game against Sweden, to keep their mission for Tokyo 2020 alive. They sent Donny Breek on the mound to make sure the Scandinavian hitters stayed quiet. Breek did just that and only allowed two hits over the upcoming six innings of work. Sharlon Schoop hit a double to center field and Hendrik Clementina scored him two hitters later. After that, also the Dutch hitters couldn’t connect to more runs and had to stay patient.

The break out came in the fifth inning when Roger Bernadina, Curt Smith and Sharlon Schoop all homered to make it 5:0. Relief Pitcher Ben Johnson could stop the bleeding for two innings but in the eighth, a long double by Roger Bernadina and another three hits made it a 9:0 ball game. Sweden was not able to put a run on the score board and had to accept their third loss of the tournament. The Dutch finally could win their first game of the tournament, as their first game against Great Britain on opening day was not yet continued. A decision on this case is expected soon.

After two days, Spain still had a clean record of 2:0 and while the win in the opening game against Croatia was not too impressive yet, the 13:5 win against Belgium was a solid one. The French also couldn’t perform the way they wanted in their first game against Italy but on Sunday they showed a stellar performance against Austria.

Soon it was clear that this would be a pitcher’s duel. Leonel Cespedes was on the hill for the French, Carlos Sierra was tapped for the Spanish. Both were controlling the game very well and only allowing a few hits. The Tricolore could strike first in fith: Jaques Boucheron Bastien reached base through an error and shortly after Bastien Dagneau made the Spanish pay, when he drove the ball out of the ballpark to make it 2:0. But also the Spanish had their opportunity to score, but couldn’t take advantage of two runners on base.

An inning later Frederic Hanvi had another important hit, scoring Maxime Levevre for the 3:0. Eric Moore was sent to the mound to relieve Cespedes. But other than his predecessors, Moore couldn’t keep the Spanish hitters in check, as he walked two and gave up two runs without recording an out. He had to hand the ball over to Daniel Camou, but also he couldn’t stop the comeback of la Furia Roja. Three errors in the inning made it easy to turn around the game and eventually the Spanish finished the inning with a score of 6:3.

Although Frederic Hanvi tried to get the French offense going again with a double, but their hope was dashed soon, when the inning was ended by a weak ground out. Rhiner Cruz came in to close out the game for the Spanish and he did an excellent job, sending the French hitters back to the dugout with a one-two-three innings.

For Monday’s night game, the table was set: Both teams had a clean 2:0-record and both contenders sent some of their best hurlers to the mound. Enorbel Marquez gave up a lead-off double to Mitch Glasser who could score on another double by Nick Rickles. Starter for Team Israel was Gabe Cramer who also allowed a lead-off hit, but his defense made sure they got out of the inning without a run. In the third, Kevin Kotowski could put some pressure on the Israelis, when he started the inning with a double. Simon Gühring took the chance and drove the ball to center field to score Kotowski from second. After another walk in the inning, Skipper Eric Holtz made the call to the Israeli bullpen to get David Sharabi. Although allowing another infield single that gave Germany the lead, Israel could avoid worse.

The game more and more developed into a thriller. Both teams got their chances and brought runners in scoring position. Exciting diving catches, strong throws and strong pitching performances help the defenses to escape from dangerous situations.

After Sharabi’s three innings, his day of work was over and Zach Weiss came on the mound. Also Germany got their bullpen going and brought Logan Grigsby in relieve. While he got out of the sixth and the seventh, he walked the first batter in the eighth inning. Israel managed to load up the bases and with two outs, Ty Kelly landed a hit in left field and drove home Mitch Glasser to tie the game: 2:2.

Triple-A Pitcher Sven Schüller came in to give is offense a chance to finish this game and did just that. Now Jonathan Demarte for Team Israel, who had already finished out the eighth inning, had the same job in the ninth. This job got even harder when Marco Cardoso started off the inning with a triple, that passed a diving right fielder. With runner on third and no out, Germany had the unique chance to break up the tie and win the game, but nobody landed a hit or was able to score Cardoso through a sacrifice fly.

The game went into the 10th and Israel was up first. Lukas Steinlein, who took over from Schüller, hit the first batter and then allowed a single to center field, which scored Mitch Glasser for the go-ahead run. On the same play, centerfielder Kotowski made an excellent throw home for an outfield assist and the first out of the inning. A few batters later Benjamin Wanger executed a sacrifice fly for the 4:2 lead. Germany went into their offensive inning with a two run deficit with catcher Simon Güring at the plate. After he failed dropping down a bunt, he smashed the ball all the way to the left field fence and while half of the crowd thought the ball was gone for a homerun, it went off the fence and was playable for Rob Paller. He threw a rocket to home plate and caught Kevin Kotowski, who tried to score from second. With runners on first and second former major leaguer Donald Lutz stepped up to the plate. He took a good cut, but the hard hit ground ball was right at the second baseman, who turned the game ending double play to secure the win for Team Israel. They are now 3:0 and with tonight’s win they can book their trip to quarter finals. 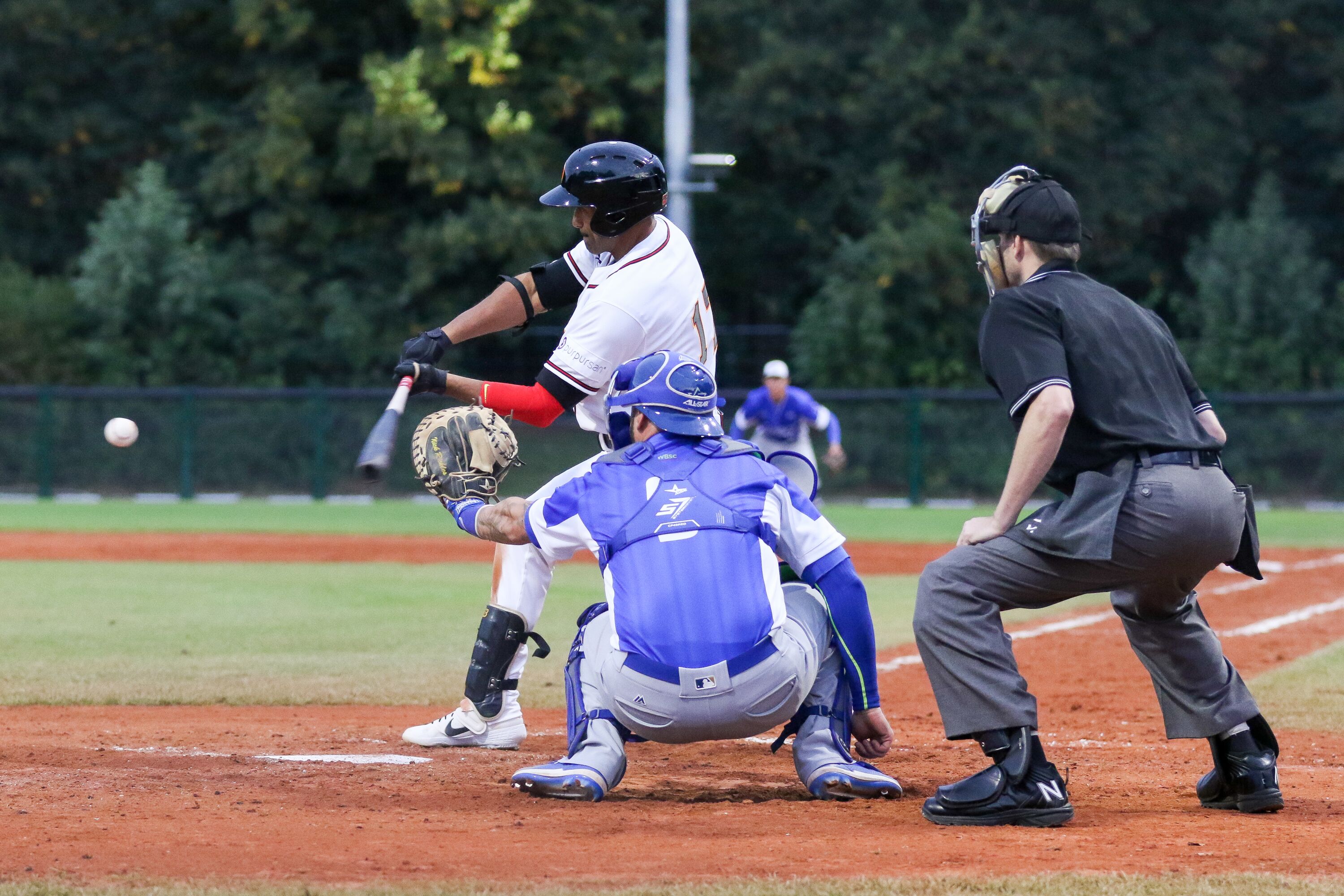 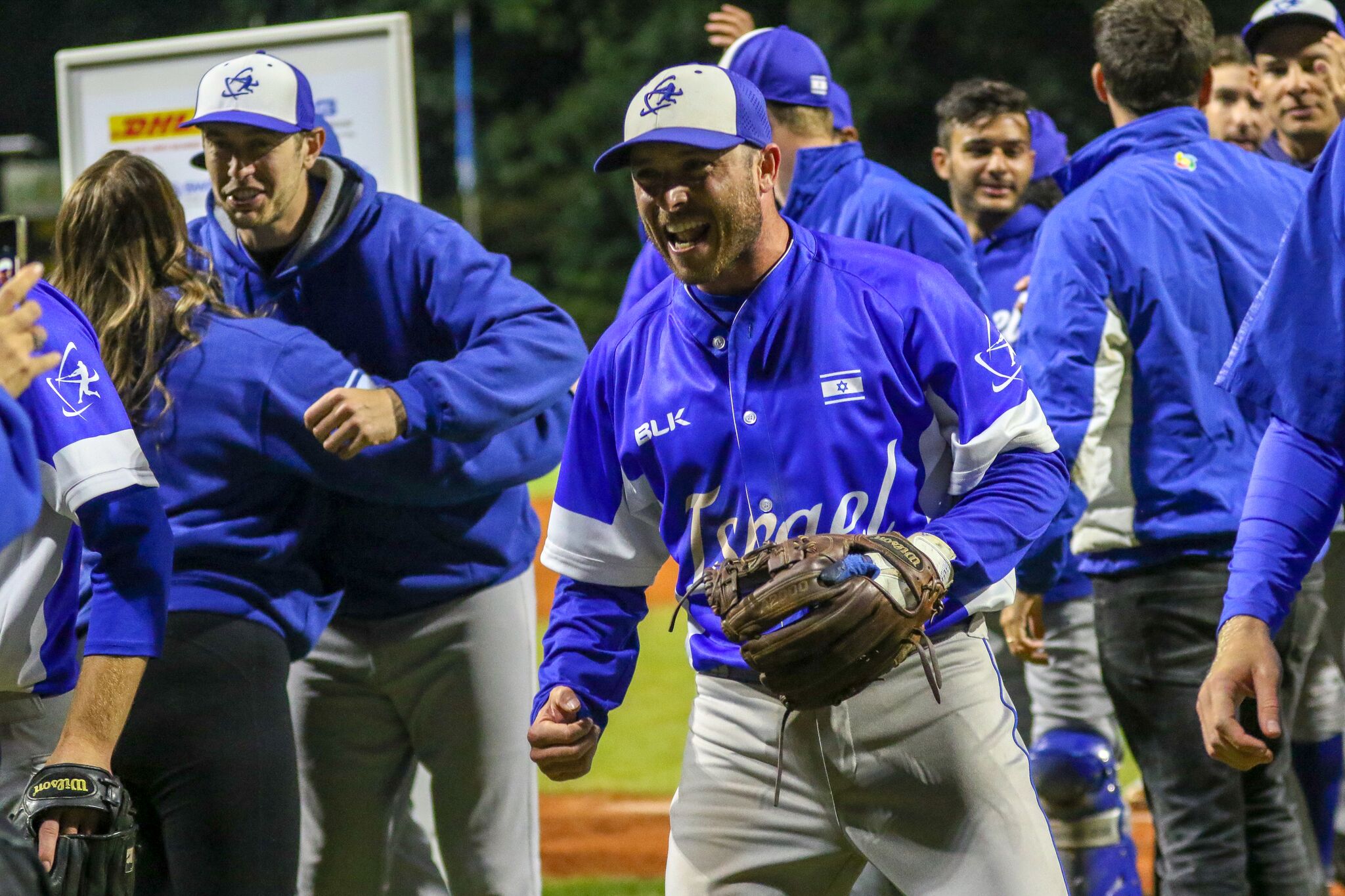